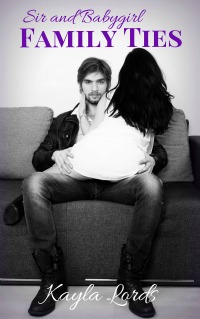 Johnathan is ready to take his relationship with Katie to a whole new level. His kids are away at college, and his sister has moved out. After months together, discovering their love and a D/s relationship as Sir and Babygirl that works for them, it’s time to meet the extended family.

Will Babygirl be able to move past her own anxieties? Can they survive the expectations of their families? And what happens to Sir and Babygirl next? Find out in the third set of adventures between a loving Dominant man and his willing and eager Babygirl.

Snaking an arm around her middle, he grabbed her mound and squeezed. She whimpered in response. The pain in her backside allowed her to ignore the swollen damp feeling coming from between her thighs.

That one word sent spasms through her body. Oh yes, she was his. Every part of her was his. She desperately hoped he’d claim his property. Now, before the door bell rang and their vanilla life intruded.

He pushed one finger into her slit.

She moaned in response.

In and out, in and out, his finger stroked the deepest parts of her body. It felt good, but it wasn’t enough. She wanted more.

With the smallest of movements, she nodded her understanding. He’d given her what she’d asked for, now he was going to take what he wanted. In the end, they’d both be satisfied.

The tip of his finger began to make small circles over her clitoris. Small, slow circles. Heat and pressure began to build. When she moved against his hand, he stopped and stroked her slit, slipping a finger into her body. Once she was still, he moved back to her clit.

Patience was required, and he was going to teach it to her one way or another. The circles came faster. Her juices coated the swollen nub, allowing his hand to move with greater ease. The pressure built higher and faster. A line of fluid trickled down the inside of her thigh.

Her desire so high it could no longer be contained by her body.

He laughed against her ear. Yes, now, please. But he wasn’t ready to stop his game. Not yet.

Thrusting two fingers deep inside her pussy, he found her innermost tender spot. Hooking his fingers, he began a familiar tap-tap-tap motion. Babygirl trembled from head to toe. Her head fell back against his shoulder. Cries and whimpers filled the air around them. She was going to come and soon but she knew instinctively if she begged or asked for release it would be denied.

Just as her body began to convulse around his hand, he stopped and pulled away. An empty feeling deep inside caused her to groan. Dark laughter was the only response. A chuckle and his touch on her clit again. Hissing between gritted teeth, she tightened every muscle in her body, desperate to hold back the looming orgasm until he granted his permission.

Calendar of my posts